14. October 2020 / Comments Off on Sri Lanka Embassy in Norway expresses interest in Robot Aviation and its SkyRobot line of UASs

Robot Aviation had the great pleasure to host a delegation from the Sri Lanka Embassy in Norway, headed by His Excellency Mr. Godfrey Cooray Ambassador to Norway, Finland and Iceland, at our facilities in Eggemoen Aviation & Technology Park.

His Excellency Cooray expressed great interest and appreciation for the work of Robot Aviation and possibilities for future collaboration. The Embassy published a long resume of the visit and Robot Aviation’s contribution to the strengthening of the relations between the two nations and the industry.

Unmanned Aircraft System (UAS) can be successful use in logistic, surveying, adverse weather conditions and in surveillance. It is user friendly, high security and low maintenance and ready to be used quickly. A UAS can also be sent into situations and conditions that would not be safe to send a manned aircraft into.
UAS systems are based on cutting edge developments in aerospace technologies, offering advancements which may open new and improved civil/commercial applications as well as improvements to the safety and efficiency of all civil aviation. UAS technology has allowed for a more integrated and optimized approach, for example, to a various farming tasks such plant stress detection, biomass estimation, weed management, inventory counting, chemical spraying and field mapping among others.
A delegation from the Sri Lanka Embassy in Norway, headed by His Excellency Mr Nawalage L. Godfrey Cooray Ambassador to Norway, Finland and Iceland, Ms Rosie Jones Business Development Officer and Mr A.T.M. Subaraj Attachè visited Eggemoen Aviation & Technology Park on Friday, September 25th, 2020 and were introduced to the work and advancements done by Robot Aviation and Tronrud Engineering.
Mr Nyroth informed that UVS International consists of 16 representatives as directors. SMEs/SMIs, national associations, and non-profit research organizations from 9 different countries: Australia, Belgium, France, Germany, Ireland, The Netherlands, Norway, Spain, and Switzerland.
Robot Aviation is pleased to represent Norway with Niklas Nyroth as a Board member for a second term.
UVS International is a non-profit association founded in 1995, registered with the Chamber of Commerce & Industry in The Hague, The Netherlands and operating out of offices in Paris, France.
The association’s focus is on the promotion of the use of remotely piloted systems (air, ground, naval, space) of all types, sizes & classes, and their relevant sub-systems.
Particular attention is paid to civil remotely piloted system operations-related policy, rules & regulations, and standards (industrial & product safety).
UVS International represents manufacturers and operators, as well as service supplying companies (including ANSPs), state organizations, regulatory authorities, academic institutions, and partner organizations.
The Ambassador and the Embassy of Sri Lanka representatives had an introduction to the capabilities of Norwegian unmanned aviation technology and discussed the future collaboration with the Sri Lanka Government.
Robotic Aviation has expressed strong interest to show the Sri Lankan Government this new and fast-evolving technology as a great investment opportunity and cost-efficient surveillance UAV s.
Mr Nyroth added that Robot Aviation is offering a new perspective on home-grown technology to Norwegian military and civilian organizations with operations in the Arctic region. Several governments have expressed high interest in this new fast-evolving industry.
The Mission representatives were introduced to SkyRobot FX10, a backpackable ISR UAS, armed with a great array of tools and features.
An EO/IR sensor makes it ideal for round the clock operations, day and night missions.
Why UAS is Robotic Aviation very special?
It can detect a human in 3km of distance and vehicle detection in 6km.
As it is fully NATO STANAG 4586 compliant, it can be easily integrated on any mission based on the standard. FX10 is backpackable and is carried by just 1 person (the operator).
The officers had a close-up observation of the functionality of Skyrobot FX10 and the different types of unmanned aerial vehicles, drone detection and neutralization systems. In a demonstration flight, the participants were introduced to the features and capabilities of SKYROBOT FX10 and the scope of using the aircraft for public safety, surveillance, object tracking, monitoring and search missions.
Robot Aviation is developing and testing SKYROBOT ™ FX450 – an Unmanned Aerial System to aid emergency response efforts around the Arctic archipelago of Svalbard.
The unmanned aerial system contains telecommunications equipment along with cameras, radar and other sensors useful to search and rescue efforts in cold harsh conditions far from regular rescue services.
From the air SKYROBOT ™ FX450 can both locate and monitor people in distress while extending mobile phone, VHF and Maritime Broadband coverage to rescuers and others.
Emergency situations are instantly more critical when occurring in remote areas under harsh conditions. Should incidents occur their unmanned aerial vehicle can give rescue efforts the capability of a bird’s eye view of the situation for up to 24 hours at a time and a range of 2000+km.
As well as disasters and SAR functions, Robot Aviation’s Skyrobot will be tested in inspections after avalanches and counting of animals.
The Mission representatives received a live demonstration of drop and landing as well as their warehouse tour where many of their prototypes are show-case.
Robot Aviation looks forward to the prospect of strengthening the ties between our two nations through business and joint efforts to protect Sri Lanka’s sovereign territory through their cost-effective technology.
The Ambassador, Mr Cooray thank Mr Nyklas Nyroth for the very informative meeting and added that he could see the technology potential for Sri Lanka to monitor the seas and ensure safe and regulated movement of sea traffic.
His Excellency Nuwalage L. Godfrey Cooray
Ambassador of Sri Lanka in Norway, Finland and Iceland 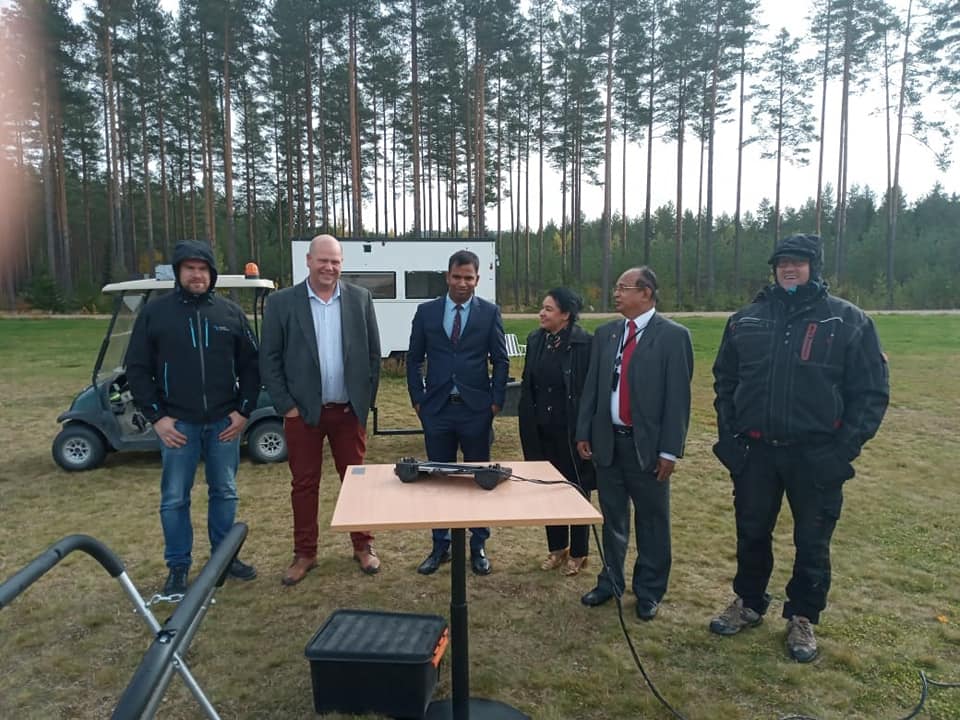